Did you know women are more likely than men to be affected by climate change? UN figures indicate that 80% of people displaced by climate change are women. And in light of the recent strikes by children across the world, it is clear that it is the most pressing issue for a lot of children around the world. So then, what role do mothers play in guiding and supporting our children in a changing climate? And what is it like to know the dangers of climate change and bring up a child in an uncertain world? END_OF_DOCUMENT_TOKEN_TO_BE_REPLACED In February 2018, I held a workshop in parliament to discuss the ways in which we could learn from the history of suffrage struggles, and the fights for political representation in the Global South, and use those lessons in reflecting on the centenary of the Representation of the People Act in Britain. The workshop was supported by PolicyBristol, History&Policy and the national Vote 100 campaign. Some of the podcasts from this event are available online. Speakers came from a range of academic and policy backgrounds, with an equally mixed audience. END_OF_DOCUMENT_TOKEN_TO_BE_REPLACED

Back when it first started, 17% of young pregnant women in the Children of the 90s study reported symptoms severe enough to indicate clinical levels of depression. This figure was already worryingly high in the 1990s, but in their daughters’ generation it is even more common: 25% of the second generation of the study – women under the age of 24 who are becoming pregnant now – are reporting signs of depression and anxiety. END_OF_DOCUMENT_TOKEN_TO_BE_REPLACED 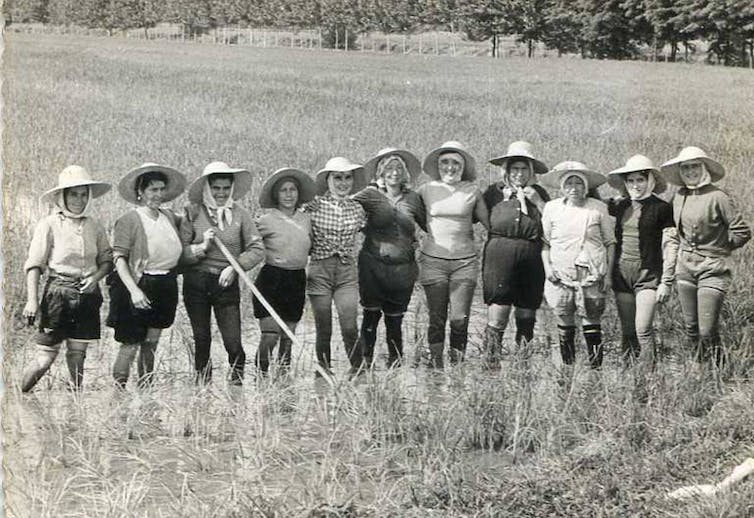 In an era before the dawn of pesticides and mechanisation, an all-female workforce was employed to “disinfect” and harvest Italy’s rice crops. These Italian rice weeders may be a thing of the past, but they have a remarkable political legacy.

Italy was, and remains, Europe’s largest rice producer. The rice weeders, known in Italian as “mondine”, could be found knee-deep in flooded fields from May until July, across Italy’s “rice belt” which spans the northern regions of Piedmont, Emilia Romagna, Lombardy and the Veneto. In my ongoing research, I study oral histories of rice weeders who worked between 1940 and 1965, collected from several interview projects and documentaries. END_OF_DOCUMENT_TOKEN_TO_BE_REPLACED Italy has long been regarded as being backwards when it comes to gender rights and sexual harassment. So in many ways, its reaction to the recent wave of revelations about sexual harassment by men in positions of power all over the world was depressingly familiar. But, at the same time, it also revealed the strength and diversity of grassroots feminism there, despite the odds. END_OF_DOCUMENT_TOKEN_TO_BE_REPLACED

Women experience the menopause between the ages of around 45 and 55, but their experiences of this significant stage of life are diverse. Each woman’s menopause is unique.

Common themes run through women’s stories, however. From our research talking with women in midlife, we found that they often talk about menopause as a normal, inevitable and natural process, which of course, it is. Seeing menopause in this way allows women to minimise symptoms and behave stoically. “It’s no big deal,” one woman told us. “You just get on with it.”

But this positive approach can also be a rebuttal of a common perception in society of the menopause as a negative event – a view which leads to denigrating women who react differently to the menopause. END_OF_DOCUMENT_TOKEN_TO_BE_REPLACED Critically, the UK, has no comparable influential institution. The Women and Equalities Committee is a new select committee and its influence is not embedded in the decision-making structures and funding mechanisms across government. The Women’s Commission was closed down by the Coalition Government, whilst the influence of the Equality and Human Rights Commission (EHRC) has been eroded over time, with significant cuts in staff and funding and thus significant limitations on its ability to deliver strategic change. END_OF_DOCUMENT_TOKEN_TO_BE_REPLACED

END_OF_DOCUMENT_TOKEN_TO_BE_REPLACED