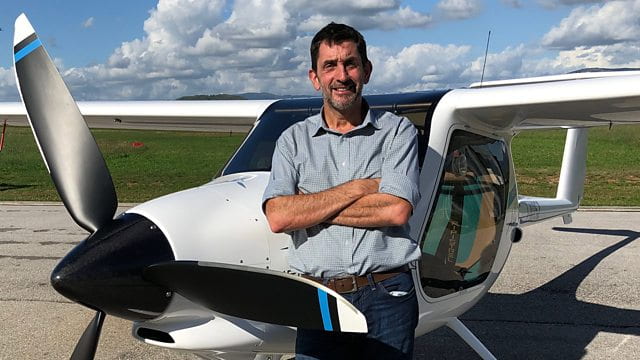 With BBC Panorama questioning if airlines are doing enough to go green, the University of Bristol We are Engineering blog asked Bristol’s engineers how they’re making aviation greener. We republish a shortened version below.

Viewers of BBC’s Panorama programme Can Flying Go Green? last week would have seen how our passion for flying is warming the planet. Aviation is a major contributor to global carbon dioxide emissions, burning more fossil fuels per passenger than any other form of transport. In the show, Justin Rowlatt investigates how the airlines are trying to clean up their act, but what is being done outside of the commercial sector to make aviation greener? Here’s what our engineers are doing to pave the way to a greener future for the industry.

For every extra kilogram, more fuel is needed to fly the same distance, and more fuel means increased carbon emissions. Reducing the weight of aircraft is hence a crucial part of making aviation more environmentally friendly.

A major contributor to the overall weight is the airframe itself. Parts of the airframe such as the wings, which are often where the fuel is stored, need to be particularly strong. Traditionally, the reinforcement of these structures has also meant an increase in their weight, but carbon-fibre composite materials could hold the key. Every kilogram of carbon fibre is stronger and stiffer than materials that have traditionally been used for airframe fabrication, such as aluminium alloys, which is why they are the focus of our Bristol Composites Institute’s research.

Dr Rainer Groh and his colleagues have developed new manufacturing techniques that enable carbon fibres to be steered in curved trajectories, which allows the creation of blended structures capable of redistributing internal loads much more smoothly, in a way only previously seen in biological structures. These carbon fibre composites will allow the weight of existing airframe structures to be reduced without reducing their strength and enable the production of entirely novel airframe structures given that designs will no longer be dictated by the constraints imposed by traditional materials.

But this is only part of the picture, as Panorama states it’s important that airlines introduce further weight-saving initiatives across fuel, luggage and internal fixtures and fittings if aircraft are going to be as light as possible. A key aspect of this will be discouraging the practice of fuel tankering in which planes are filled with extra fuel, usually to avoid paying higher prices for refuelling at destination airports. After the airframe, the fuel is the biggest contributor to the weight of an aircraft, which is why it’s so important for other airlines to follow the lead taken by British Airways, which since the programme aired has pledged to review its use of fuel tankering.

In the future we could see the advent of aerial refuelling, which will allow smaller, less fuel-hungry aircraft to fly longer distances more efficiently. Another change we could see is commercial aircraft flying in a V-formation, like migrating birds, which would increase lift and reduce drag. Safety is paramount in the aviation sector, which is why our aerospace engineers Dr Tom Kent and Dr Steve Bullock have been investigating the routing, sensing and automated control developments needed to make aerial refuelling and formation flight possible.

To make it more complicated, the air pushing against the aircraft producing drag is also producing the lift needed to keep the aircraft in the air. At the same time the aircraft is flexing, changing shape, as a result of all these aerodynamic forces acting upon it. The amount of lift and drag depends on the size and shape of the structure the air is pushing against. It’s not always possible to just decrease the size of certain airframe structures but it is possible to change their shape to make them more aerodynamic.

Our engineers in our Fluid and Aerodynamics Research Group, led by Dr Dorian Jones, are working to optimise designs for airframe structures from aeroplanes to helicopters to make them as aerodynamic as possible. Using our supercomputing and wind tunnel facilities, they examine how air moves across their designs to make them more aerodynamic so that aircraft can achieve greater fuel efficiency by reducing drag but keeping the lift.

As part of this work the group uses high-performance computing and high-fidelity simulation and optimisation codes for drag reduction and aerodynamic design that have been used by Airbus, Leonardo Helicopters and BAE Systems. This is the most active research area for high-performance computing use, but it’s not the only area in which this form of supercomputing is playing a role in transforming aviation.

Researchers in our High-Performance Computing Research Group are also using supercomputers to make designing and prototyping of new jet engines through simulation viable for companies in the aviation industry.

Developing new engine models for market has traditionally required the prototype to be built and physically tested, often passing through several iterations each of which requires the components to be remanufactured. This activity contributes to the aviation industry’s carbon footprint.

Using supercomputers, our computer scientists are developing advanced modelling software and simulation programmes that can produce a jet engine simulation so accurate that designs will be able to be signed off by the civil aviation authorities without the need to build multiple prototypes. This will save the industry millions of pounds, which could then be allocated to funding the development of emission-reducing technology.

They have also developed software that can accurately model the physical effects of thermo-mechanics, electromagnetics and computational fluid dynamics and simulation-based design programmes, which enable much more rapid development of new engines and radical new techniques to achieve greater engine reliability and fuel efficiency.

With the exception of people flying less, the electrification of propulsion in aircraft will have the single greatest impact on reducing the aviation sector’s carbon emissions.

Traditionally fuel handling, cabin air pressurisation systems and actuation, the link between the flight controls and the rudders and flaps on the wings and tail, were all powered through hydraulic, pneumatic and mechanical means but these are gradually being replaced with electrical systems. The next major breakthrough will be where the propulsion will be driven electrically and distributed across the aircraft wings and body to improve aerodynamic efficiency.

Researchers in our Electrical Energy Management Group, led by Professor Phil Mellor, are working on innovations to distribute and power propulsion electrically that can be both lightweight and energy efficient. The key here is to use distributed electrical propulsion to improve the efficiency of aircraft through hybridisation, this means the aircraft will function like a hybrid car where there is still a fuel engine.

It is difficult to find alternatives to the energy density of kerosene fuel, but further hybridisation will allow for alternative fuels such as biofuels to be used. These hybrid aircraft will lead to cleaner operations, with the potential for zero emissions taxiing from gate to runway, which would help to reduce air pollution levels in and around airports.

The Snitch, what an electric aircraft could look like in the future

But it’s not just about reducing carbon emissions, in order to achieve greener aviation, we also need to look at the damaging effects of water vapour and soot emissions.

When released in the sufficiently cold and humid conditions of the upper troposphere, the emitted water vapour condenses around the soot particles due to the high humidity and then proceeds to freeze due to low temperatures, leading to the formation of a type of ice cloud in the wake of the aircraft known as a contrail.

These contrails often dissipate within minutes and have very little effect on the climate. However, when aircraft fly through ice super-saturated regions (ISSRs), where the ambient conditions are sufficiently cold and humid, the contrails can persist for up to 10 hours, transitioning into cirrus clouds that have the potential to spread over hundreds of kilometres.

As these clouds are more effective at trapping heat within the atmosphere than they are at reflecting inbound sunlight, they produce a net warming effect. One way to tackle this is to develop sustainable aviation fuel that produces less soot, the other is to look at where in the atmosphere this soot is being emitted.

Aerospace student Kieran Tait is using emissions estimation software and atmospheric modelling to investigate how current flight paths can be altered, in terms of route and flying altitude, to avoid ISSRs most sensitive to contrail formation, which tend to be found in the tropics at high altitudes and the extratropics at lower altitudes. In some cases, these flight path alterations may increase flight time causing more fuel to be burned and therefore an associated increase in carbon emissions, but by avoiding sensitive regions, overall the flight will actually be less damaging to the environment.

Contrails forming from the exhaust fumes of an aircraft

Contrails streaking across our skies are a visible sign of the growing number of flights but they’re not the only noticeable sign of this expansion. Those living underneath flight paths or in proximity to large airports will be all too aware of the level of noise generated by aviation.

Although reducing the level of noise generated by aircraft doesn’t contribute to reducing the carbon emissions, it is an important consideration given that, as Panorama says, the aviation sector is set to continue to expand. Noise has significant effects on society, impacting on health, productivity and ecosystems.

The World Health Organisation estimates that up to 1.6 million healthy life years are lost each year in western European because of exposure to high levels of noise, with a social cost of between £60 billion to £100 billion per annum. In almost every environmental noise report produced for the UK and EU governments, aerodynamic noise, which includes aircraft-generated noise, is recognised as one of the most intrusive types of noise pollution, with major public health implications.

Considering the current growth rate of commercial aviation and the emergence of new technologies, such as air-taxi and drones, noise is expected to remain an important problem facing the industry. Researchers in our Aeroacoustics Research Team, led by Professor Mahdi Azarpeyvand, work on better understanding noise from different aero-components and are developing novel passive and active methods to reduce the noise at its source through testing in the National Wind Tunnel Aeroacoustic Facility based here in our Faculty.

A matter of time

It’s not so much a matter of how but when. We are developing the right solutions to aviation’s emissions problems, but as Panorama highlights it is a case of the timescale needed to make these solutions commercially and practically viable and to roll these out across the global aviation sector. The work we are doing within aerodynamics, flight paths, simulation-based design and carbon fibre fabrication means that we can start mitigating the detrimental impacts of aviation whilst we work towards better electrification of aircraft.

Read more about the Faculty of Engineering on the original blog post.