Dr. Erdem Dikici, Research Affiliate at the Centre for the Study of Ethnicity and Citizenship, University of Bristol

A decade ago, research by Pinar Enneli, Tariq Modood and Harriet Bradley identified Turkish-speaking people in Britain (Turkish Cypriots, and Turks and Kurds from mainland Turkey) as ‘invisible minority groups.’ ‘Such groups’, it was noted, ‘make little appearance in public debates about race relations and have been little studied within academic social science.’

Hopefully, this is about to change because of the latest, and indeed scandalous, argument of the British Vote Leave campaign, that (i) Turks engender a threat to national security, and (ii) 12 million Turks will flood into Britain if Britain remains in the EU and Turkey successfully joins the EU.

As Turks have made the front pages of newspapers and become central to the public debates regarding Brexit/Bremain, there seems to be an opportunity for Turks to come to the fore, to become more “visible” within the fabric of multi-ethnic Britain. Thus, rather than focusing on Turkey’s EU accession journey or what would be the consequences of an alleged/imagined massive influx of Turks in the UK, I believe that it is more important to take the recent media coverage of Turks as an opportunity to make a case for Turks already residing in the UK.

Olympia, London, used as the venue for Turkish expats voting in the 2015 general election between 30 and 31 May 2015. Credit – Nub Cake. Wikimedia Commons.

At one level, the Brexit campaign seem to have shot themselves in the foot by portraying Turks as criminals and terrorists. At another level, such hostile and racist arguments seem to be discomforting and offending the Turkish-speaking population in the UK. At the very least, one can confidently argue, such xenophobic campaigns do not help Turks to develop/further a sense of attachment to Britain and instead reinforce racial prejudices. Still, I would like to argue, there are important mechanisms within the Turkish-speaking community in Britain that promote a sense of belonging and integration.

The Dialogue Society, a community organization founded by second generation Turkish/British Muslims who are inspired by prominent Turkish Islamic scholar Fethullah Gulen, seems to be one of the mechanisms working for social advancement and integration for all (especially Turks).

The Dialogue Society is a London-based autonomous organization founded by British Muslims of Turkish background. The organization seeks to promote and work for an interconnected and cohesive society. To this end, followers of the organization have held hundreds of community outreach events across the UK, such as community engagement breakfasts, thematic dinners, Ramadan Fast-Breaking Dinners, Noah’s Pudding Celebrations, visits to state institutions and other communities, and many other civil society activities. 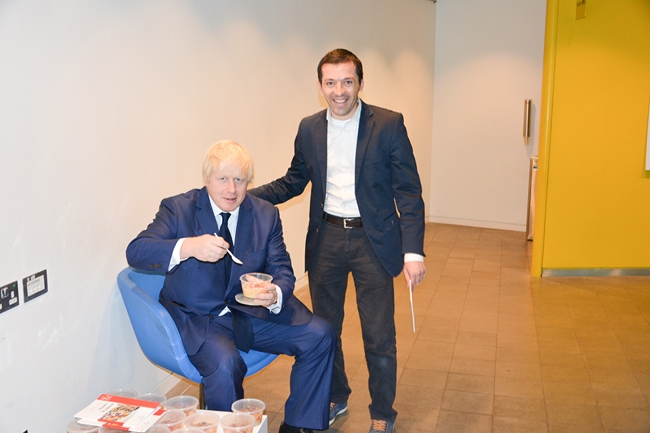 In research I conducted with the organization in 2015, I found that unlike many political Islamist organisations in Europe, the Gulen-inspired Dialogue Society (DS) believes that integration and developing a sense of attachment towards the country of settlement is not just important and necessary, but also a “moral responsibility” placed on everyone (i.e. Muslims).

Firstly, they believe that people are responsible for coming out of their comfort zones to engage with and build bridges between people of different dispositions. “Coming out of comfort zone” implies that people cannot be integrated into, nor connected with, the place of residence if they sit at home all the time or socialize with people like them; instead, they need to be proactive, that is, they need to come out of their ethnic enclaves and show some effort to engage with people of different culture and faith, and the wider society.

Secondly, the state ‘has the responsibility to facilitate and lubricate integration,’ said the chair of the Dialogue Society. The state’s responsibility, he added, should not be seen as merely encouragement: it must be ‘providing housing, welfare, jobs […and] safety, which will lead to a sense of belonging.’ Whilst promoting and enabling integration, he crucially argued, the state One of the significant contributions of the organization is its rigorous emphasis on activities regarding subjective identification with, or a sense of belonging towards, Britain. 11 out of 26 senior members of the Gulen community in Britain, whom I  interviewed in October-December 2015 as part of my study , stated that they identify themselves as “British Muslim of Turkish background”; 5 of them as merely “British”. For them, one’s identification with the identity of the settled country is a sign of integration; developing multiple/hyphenated identities is good as long as one preserves the original identity.  The very philosophy (i.e. dialogue) and activities (i.e. engagement with the wider society) of the organization seem to play a key role in its followers’ engagement with “the other”. The co-director of the Dialogue Society, for instance, stated that

‘since my sort of roads crossed [sic] with the movement, up until that I was quite a proud Turk, I still am. But I don’t think that’s the only thing that defines me.’

Understandably, the Dialogue Society does not only focus on the Turkish community. It also seeks to reach out to people of various backgrounds from different strata of the wider society. In November 2014, for instance, they co-organized (with the Centre for Trust, Peace & Social Relations of Coventry University) a workshop on ‘Sense of Belonging in a Diverse Britain’ by bringing together various experts to discuss issues related to British identity. The proceedings of the workshop were later published, and form an important contribution to the national debates on Britishness.

Rather than merely focusing on preserving Turkish identity of Turks residing in the UK, the organization seeks to advance a shared national identity where they can navigate their ways without losing their identity of origin. This is certainly a step forward for the future of multi-ethnic Britain.

In summary, the debates around Turks in Britain, related or unrelated to the Brexit campaign, should not be hindered by limited, mostly superficial, knowledge, but must be underpinned by up-to-date research. The Turkish-speaking community in Britain, now that their number exceeds half a million, should be seen as a dynamic and important ethno-religious group. The Gulen-inspired Dialogue Society, as a mechanism from within the Turkish community, should be encouraged and collaborated with further as they carry out their work on integration  and  social advancement.