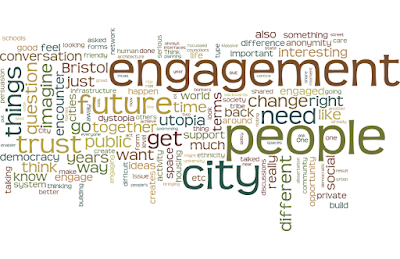 A strand of discussion that captured the collective imagination was the idea of utopias – not as an impossible goal but rather as a method to help us move beyond the immediate issues of what we know now. Particularly in the current economic and environmental crises, the use of visions of utopia as a method for imagining a better world and alternative futures is a great tool – although we can also imagine the opposite, the dystopian vision of social disruption in an overcrowded, overheated world fighting for limited resources.

We have set an important, ambitious target for combatting climate change: that by 2050 we must have an 80% reduction in our carbon emissions; and we’ve been talking about the profound inequality in the city and the lack of social mobility for years – neither of these will change with incremental efforts. The Utopian approach allows us to imagine beyond what we know now, to think further ahead. Continuing to work in 5 year cycles is only tweaking when what is needed is system change – we can wait for the ruptures or be bold in addressing the big problems. We know that the city will be very different in the future, that the potential is there for dystopia if we don’t act.

‘We need to start thinking about how we best plan for the type of world we want, because if we just carry on the way the current narrative is playing out, it feels more like dystopia than utopia’.

Could we try to imagine out of that dystopia what the possibilities are? To use a great phrase from Seamus Heaney, we need to ‘make space for the marvellous as well as the murderous’, the utopian vision coming out of crisis. But of course there are tension between what we think will happen and an imagined ideal future and we need to work with the first to get the second – and work out what will make the difference in what we end up with.

‘We need to start thinking about how we best plan for the type of world we want, because if we just carry on the way the current narrative is playing out, it feels more like dystopia than utopia’.

Could we try to imagine out of that dystopia what the possibilities are? To use a great phrase from Seamus Heaney, we need to ‘make space for the marvellous as well as the murderous’, the utopian vision coming out of crisis. But of course there are tension between what we think will happen and an imagined ideal future and we need to work with the first to get the second – and work out what will make the difference in what we end up with.

Utopias are liberating: an imagined goal to work to
Visions are constraining: just limiting variations of now

Spaces of encounter and trust

Living in cities allows us to collaborate and survive better. But cities also allow anonymity (for better and worse) and non-participation, creating boundaries between different communities and the segregation that many perceive, generationally and culturally and within and across communities. How could the infrastructure be changed to allow the creation and connection of neutral spaces in order to facilitate interaction? Could a city be designed to actively help people to get to know each other? A city designed to break down barriers between differences, and that values and perceives diversity in all its guises to be a ‘fantastically wonderful, magical, absolutely life-enhancing, collaborative opportunity’.

We do know how to do some of this this, but it’s not happening and more needs to be done if a city’s infrastructure, services and technologies are to make positive contributions to building trust across communities, cultures and generational groups. Infrastructure could then be an enabler of bringing people together, creating spaces for encounter and reasons for interaction and discovery, celebrating and sharing stories and creating connections.

In overcoming intergenerational barriers, there are great examples from around Europe: ante-natal care in old peoples’ homes in Switzerland or co-housing students and older people in Amsterdam. The class and ethnicity barriers seem to be harder to crack – children in schools work together but increasing segregation occurs after age 16, so understanding why and what could be done to build trust and communication between communities is needed.

Trust came up strongly in the conversation, the need to build networks of trust to start to erode boundaries, having conversations to build lasting relationships, finding and using ways for neighbours to know each other. Across Bristol, neighbourly gatherings are building local encounter – like street parties and Playing Out.

Looking further ahead, should we start with envisioning how would we all want to be with each other and treat each other in 50 years’ time in order to have society that works? Can this help to create a Utopian image of human relationships and forms of engagement to work towards?

Who are ‘we’ and are we right?

There’s a danger with all these good intentions that what we really think is that all that needs to happen is everyone else should think like ‘us’. Is there therefore a risk that engagement is really more about persuasion? There are many forms of engagement and many people are engaged in different ways. It is important that we celebrate and value different contributions so that everyone feels like they have a role. For example, surely someone supporting a kid’s after-school basketball club in Southmead is engaged – they’re helping young people to learn leadership and team working skills. They’re encouraging low-carbon, high-community activity (rather than playing sedentary electronic games or engaging in other more antisocial behaviour). They are actively and directly community building and, although they might not use these words, they’re engaged in Future Cities too.

Are certain types of engagement the only valid ones? What about the new political engagement that the Scottish referendum brought about for example, through harnessing new places and by engaging young people more successfully. Riots are also a form of engagement, bringing people together and making something happen – in Bristol, the St Pauls Riots of 1982 resulted in change – this type of engagement is more profound than elections but it’s also messy and disruptive. Mob engagement, civil disobedience, communities collaborating to be exclusive, these are all forms of engagement… are we then talking about ‘good’ and ‘bad’ engagement?

So perhaps everyone can coalesce around the common human aim of having a better future for us and ones we love with human (and environmental) flourishing at the core of everything, tackling issues of equity and justice and not forgetting the climate imperative that might force us to act more decisively together.

We talked in previous debates about who has the power. Here we also discussed democracy and the democratic mandate of the big organisations that have power in the city. The city council of course has a democratic mandate through its elected councillors and mayor but other major ‘anchor’ organisations do not. These still have the ability to shape and influence policy – organisations such as the universities, health services, travel providers and big businesses in the city.

However, even where there is a democratic potential, not everyone exercises their rights to participate in democracy. For example in the last mayoral election, around 12% voted in parts of south Bristol, compared to over 55% in the more affluent northern areas, leading to a huge democratic deficit which demonstrates that current forms of engagement in the running of the city are not working. There is something about the current idea of politics which is not engaging so, as we’ve reflected above, new engagements which address building trust, inclusion and the embracing of diversity are necessary.

The large institutions in the city do have power but they are seen as impenetrable, unaccountable and not good at democracy and yet they have the resources to do much good where the city council is constrained by its bureaucratic processes and lack of resources. Grassroots activities should also have a role in the formal democratic processes, allowing power to be diffused and giving more communities agency, influence and a voice.

People involved in Green Capital have been described as the ‘emerald city’ and they are just a small group within the overall population of over 400,000. But how many ‘degrees of separation’ are there to reach the whole city? How can we, as a future city, build on the levels of engagement and ambition for resilience and sustainability started in this Green Capital year, working through all the networks and across the separations?

In this third session we talked about engagement through the ideas of Utopia (and dystopia), spaces to facilitate encounter, and the necessary building of trust. We questioned what is meant by ‘engagement’ – whether we’re missing valuable contributions by holding onto a narrow definition and that what ‘we’ might really mean is more akin to persuasion. Some forms of engagement are messy and disruptive but sometimes ruptures are needed to force the radical change that isn’t happening through the routine tweaking of the familiar. The exercise of imagining the future opens up a conversation about what to do tomorrow in seeking a better future for us all, making ‘space for the marvellous as well as the murderous’. It should be less ‘we engaging them’ and more ‘us all co-creating’ a thriving city for now and in the future.