In Bristol’s European Green Capital year, the University of Bristol and its Cabot Institute explored new ways of engaging more widely with the city and the range of organisations that make up city life and, in particular, with the Green Capital Partnership and its members. One of these forms of engagement has been to convene a series of conversations between Bristol academics and city ‘thinkers’ from across public, private and civil society, to try to move the discussion about Bristol’s future beyond what we already know to what it really means to be a future sustainable city and what capacities Bristol needs for the future – and how it can start to develop these in times of changing governance and tightened finances. 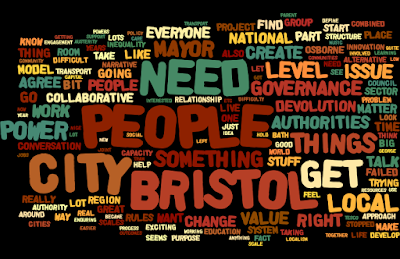 Our first debate took the theme of ‘Devolution and new forms of governance’ on a beautiful sunny Bristol evening when an invited group of some 30 city people came together for the first of 4 conversations on the (sustainable) future of Bristol – its capacity, opportunities, needs and blockages. What follows are some of the big issues identified and the start of what we can do to address them.

We acknowledged that Bristol is, on the whole, a successful city, with a thriving economy, judged to be one of the best places to live, culturally vibrant and with a reputation for doing things differently – including being the only UK city to vote for a directly elected mayor in 2012. Bristol’s leadership is more visible locally, nationally and internationally now, it is a member of the UK ‘Core Cities Group’, and business finds it easier to work with – although not all parts of the city value these changes. Bristol also has another darker side, with high levels of child poverty, lower school achievement and a lack of investment in infrastructure.

First and perhaps inevitably, the conversation was about Bristol and its neighbouring local authority areas – the ‘Counties that used to be Avon’ (or CUBA for short). There is resistance from the other unitary areas to (re-) forming something akin to Avon with Bristol’s perceived dominance – a ‘mutual loathing and distrust’ between the authorities is surely something to be addressed. The authorities involved could choose not to ‘indulge in the loathing behaviour’ but re-approach one another in a spirit of mutual collaboration and partnership – which we are now starting to see as they consider the potential of the government’s offer for devolution to metro areas.

For Bristol in particular, the current authority boundaries are a real problem with ‘stupid red lines’ cutting across the urban area, particularly to the north and east, dividing parts of the city out into other local authority’s control and creating arguments about the positioning and ownership of services. The various local government boundary changes have, over time, seen an evolution to the current four unitaries with boundaries that are historical but make little sense in 2015. We have an overall population of about a million, with people travelling to work, shop and play across the boundaries and now there is an opportunity and a need for more effective working together, that, in one participant’s words, it ‘makes total sense to be one entity’ with more devolved powers and budgets (as the Manchester metro-region is doing) which will allow longer term fiscal planning. At the moment, layers of bureaucracy get in the way of getting things done. If Bristol is the ‘capital’, it needs to show that it is working for the whole region, that it can be supportive and empowering of all the urban and rural parts. The question now is how to create mechanisms that facilitate enduring collaboration in a locally relevant way and which can withstand the buffeting of national policy changes.

Moral purpose and the ‘dark side’

So, how do we set up these enduring partnerships? We think it starts with finding a common moral purpose, something that everyone thinks we should be doing to help the city (and region) work better. This could be something to do with addressing the ‘dark side’ of the city and the inequalities that persist – for example there is a 10 year life expectancy gap between the richer and poorer parts of the city and that’s not ok. There’s 25% child poverty, a lack of real representation of different communities in the power and governance of the city and a segregation between and within communities (especially generationally) so that only certain voices are heard. So it’s not a very equal or well represented city, in fact less so than at the time of the St Paul’s Riots in the 1980s and this causes tensions. We need to set up governance structures locally that can address inequalities – because it’s not happening nationally – and we’re concerned with issues of social and environmental justice not just because it’s right but also because reducing inequalities will actually improve everyone’s lives.

Finding out what stops action and who has the power

In developing new forms of governance, the city first needs to acknowledge where the current power and blockages are. We see that there are lots of visionary people coming up with amazing ideas which then don’t make it into reality – why is that? Who blocks innovation and why? Is it mostly to do with the short term nature of government policy and funding or is there something more fundamental going on that we could work to address and allow brave ideas to flourish better and at a bigger scale? We talked about the central initiatives that have come and gone over the years and acknowledge that we need to draw on and learn from history, taking the best from the local council and encouraging risk taking in order to flourish.

The low electoral turnouts show that people don’t currently connect well with their elected representatives and that more could be done to open those lines of communication and trust and improve the democratic process – meanwhile, so much interesting stuff is going on that isn’t done by the council at all but by other people.

Innovation in spite of rules

Bristol is an innovative city and lots of the best things have happened in spite of the rules, when communities and citizens have taken the initiative and made things happen. There has always been grassroots activity in the city, taking place without waiting for permission, and the council has allowed this – there’s no big municipalism compared with some cities in the north, so the city hasn’t crowded out initiative, but rather it has ceded power and allowed initiatives to emerge. The question then is whether formalising devolution within the city might kill the thing we’re trying to grow – how do we govern so that things happen because of policy rather than despite it? And how do we provide an environment where good ideas grow beyond the ‘bubbles of innovation’ that have flourished in this permissive environment? Now that the council is expected to let go of more areas of control because it has little budget, we are actually ahead of the curve and doing it – people in the city have the experience of making things happen in interesting ways.

A visible and much publicized example of local action is in the Stokes Croft area but it’s not the only place. The Stokes Croft ‘anti-Tesco riots’ showed that people will get up and protest against what they don’t want but, in another part of the city, a Tesco Metro would be a welcome source of decent food. So we have to acknowledge that locally relevant approaches are needed and that means community led responses – as we are now seeing in Redcliffe, Barton Hill, Southmead, Lawrence Weston and other places around the city. But not all communities currently have the capacity to take the lead, so helping to develop ‘collective action’ at different levels is key. Neighbourhood partnerships are at best a partial success, working best where there are active communities, but the potential to engage and use the resources of local business to support communities is untapped.

The people participating in these debates do not represent the spectrum of thought within Bristol but if we can start to untangle how the city is managed now and for the future then further conversation might involve different people from across the city. We might be a ‘leftie liberal’ group as one participant suggested but we’ve got lots of connections across the city which can be drawn on to take responsibility for doing something, whilst also recognizing that we can’t change everything all at once!

One idea was that we should start with an issue or sector of concern such as transport or housing and explore it at all the different levels, working together to see how a new governance model would play out in reality. For example, take transport, this impacts on everyone’s quality of life and has a disproportionately high impact on the poorest people and their ability to move around the city and hence has a direct impact on equalities.

There are three more debates and through them we aim to develop and strengthen the relationship between the university and civil society in the city so that we can collaborate in the long term for the benefit of the city. It is also about a real concern for our city, taking advantage of the year’s Green Capital status to look at how Bristol (and other cities) can develop into the future – drawing on the knowledge and expertise galvanized in 2015 and trying to create a legacy that will live long after this year of activity and debate.