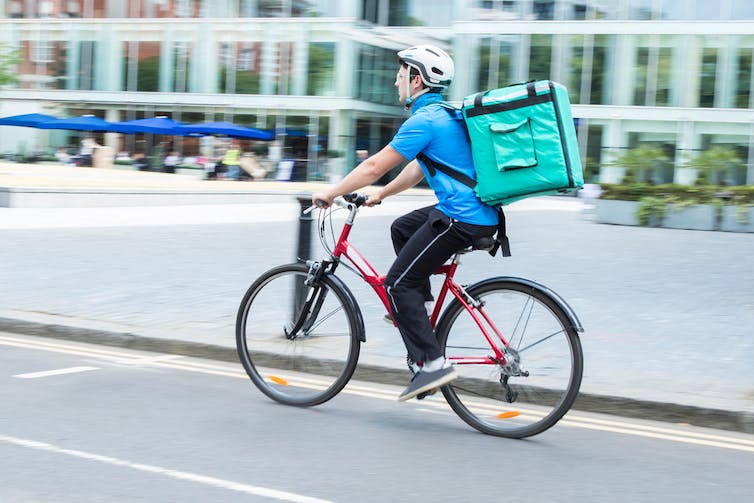 Don Lane’s employment contract for his work as a courier described him as an “independent contractor”. This meant he was neither an “employee” nor a “worker”, so not entitled to legal rights such as protection against dismissal, paid holidays, or statutory sick pay.

The 53-year-old also suffered from diabetes, and had previously been fined £150 by the delivery firm he worked for for missing work to attend a hospital appointment. He died in January 2018 after working through the Christmas season despite his illness.The following month, the British government revealed its response to an earlier official report on modern working practices. That report, by Matthew Taylor, contained 53 recommendations to improve the working environment, or achieve the report’s title, namely “good work”.

The government accepted most of the review recommendations, but has decided on further consultation rather than implementation. It apparently wants more information on the four subjects of employment status, transparency in the labour market, agency workers and enforcement of employment rights.

While the government says it is contemplating “the single largest shift in employment status since the Employment Rights Act in 1996”, its focus is on clarification rather than action. The reason seems to lie in its endorsement of the “flexibility” of the current UK labour market, which it believes enables individuals and employers to “make the choices that are right for them”.

The notion that such “choices” are actually constrained is ignored. Instead, the blame for poor practice is laid at the door of the occasional and exceptional “bad” employer. While some improvements are considered, they do not broaden the scope of access to statutory rights at work in a way that would have helped Lane.

The government proposes consultation on Taylor’s suggestion that the statutory definition of “workers” should be revisited; so that rights including protections over minimum wages and working time would be more widely available. Also, that statutory sick pay (SSP) would become applicable to this group. However, the proposed introduction of a new control test for “workers”, which usually only applies to the more protected class of “employees”, could actually reduce access to protections for drivers in Lane’s position.

Another problem is continuity. Many working in the gig economy are “employees” for the duration of their hire on a particular day – but not in weeks when they take time off, go on holiday or aren’t offered any work. As a result they often don’t accrue sufficient continuous service for entitlement to rights such as unfair dismissal or statutory maternity pay.

The government now proposes increasing the length of time which counts as a “break in continuity” from one week to one month. In principle, this is welcome, but no detail is given on the proposed changes. And it fails to ask whether the rules on continuity are justified in the first place.

The International Labour Organisation (ILO) Tripartite Committee considered a two-year qualifying period (needed for most unfair dismissal claims) went beyond the the time necessary to assess whether workers are capable in their job – so wasn’t justified.

And according to the European Court of Human Rights, protection of reputation is an integral element of private life. An unjustified dismissal affects prospects of future employment so why are two years’ service required before those rights apply? A fundamental reassessment based on international human rights norms has been rejected in favour of papering over the cracks.

The Taylor Review also recommended that there should be closer alignment between status for tax and employment purposes. Tax law works on a simple binary divide between “employees” and “independent contractors” without recognising “worker” status.

Under the current regime, an independent contractor may be a worker for the purposes of certain employment rights but self-employed when it comes to tax (so no employer National Insurance Contributions are paid).

Those classified as employees for tax purposes may, oddly, not be employees for the purpose of rights such as unfair dismissal or current SSP. The government wants to tackle false claims of self-employment, and increase tax revenue. Yet changing the tax boundaries will be unpopular if greater obligations are owed by employers to those who work for them (possibly promoting ever more inventive and evasive corporate structures).

Ultimately, the government’s response to the review of modern working practices is disingenuous. It offers a childlike narrative of “good” employers using flexibility against “bad” employers engaged in evasive exploitation. This politically convenient fairy tale of saints and sinners obscures the central fact that “bad work” has spread. It has festered in an era of state deregulation, union suppression, cuts to public services, and the contraction of the welfare state. That is the true story of Lane’s betrayal.